Pokémon Go or Pokémon No? 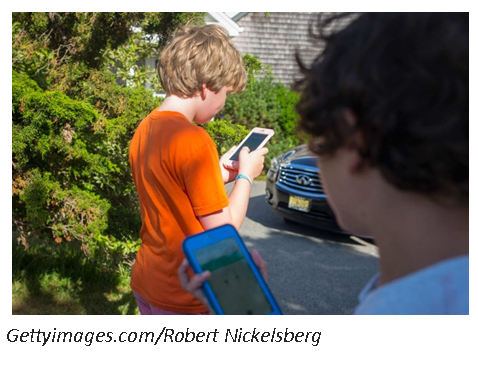 In case you’ve been out of our solar system for the past few weeks, you’ve by now heard of Pokémon Go. You know, “Gotta Catch ‘Em All.” Right? But just in case you were visiting Pluto, let’s get you up to speed. Pokémon Go is a free, location-based app for Apple and Android devices. Users get up and out (yes–outside! while gaming!) and through augmented reality, try to catch Pokémon cartoon characters on their smartphone screens. Augmented reality is a live view of the world that is enhanced by computer-generated input such as images, sound, video or GPS information. Meaning, you use the app on the phone to play a game that essentially superimposes Pokémon characters on the screen as if they were actually appearing in real life. The goal of the game is to catch as many characters as possible and advance through the game. Three days after its release, the app had more users than Twitter. The app set new download records and sent stock prices soaring for game creators Nintendo, Google-spinoff Niantic, and Pokemon Company. The app got users playing the game to leave their house, be outside, and interact with other users. With the good, comes the bad and most certainly some ugly.

Kids (and adults as well) are getting outside! You’ve got to walk and travel to collect Pokémon. There are PokeStops, which are predesignated places (often community landmarks) where certain items are collected which help you in your quest to catch more characters. And you must keep moving and traveling to find characters, and reach PokeStops. So it’s good. People are walking. We’re talking miles and miles. And people are outdoors. We’re talking grass and sky and sun. And one of the seemingly unforeseen effects of this game is its positive impact on individuals with autism spectrum disorder (ASD). For those with ASD, social interactions are often awkward and limited. However, for players with ASD, having a shared interest is making social interactions easier. Stories can be found about children with ASD suddenly seeking changes in their routines. Some children who rarely leave their usual environment are asking to go, for example, to the park in the evening. Others, for whom eye contact and interaction are very limited are high-fiving other players. So yes, some good.

The first seemingly obvious bad is the ability of users to so fully immerse themselves in the game that despite onscreen warnings to be alert to your environment, they forget to look up from their screens. Stories abound of players crossing streets, riding bikes, skateboarding, and yes—even driving—while playing the game. Is it really necessary to say don’t do those things while looking down at a screen? Players are also trespassing on private property and venturing into known risky areas all to catch a rare Pokémon. Common sense must not be abandoned! You can be smart and cautious and still have fun.

The ugly is bad on steroids. Stories have surfaced of players finding a dead body while searching for a Pokémon. There are also claims of players walking off cliffs. Other stories state players were “lured” (yes there are lures that can be purchased to encourage players to visit a particular area to find Pokémon) only to find trouble. Business owners can purchase these ‘Lure Modules’ and encourage customers to visit while catching Pokémon, but of course ugly can always rear its head. So be smart!

In all, there is hope that good will conquer the bad and ugly. And this is just the tip of the augmented reality gaming iceberg. Getting exercise, being outdoors, interacting with others and having fun are encouraging in this day of excess screen usage. Still looking at a screen, for sure—but, baby steps, right? And watch where you walk.